​A spy has been round Aylsham leaving letters and clues at different sites to a hidden password! The answers to all the clues can be found in these webpages all about the history of Aylsham. When you find the answer, you will be given a letter. The letters spell out the password he has hidden.

Webpages that hide the answers!

Map of the virtual clue locations 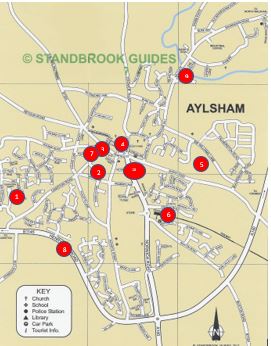 Questions! - Let the Searching begin!
(All the clues are downloadable by clicking here.)

1. The workhouse in Aylsham was built in 1849 and was designed by the architect William Donthorn. This is why the road leading up to the building is called Donthorn Court. The workhouse was a place where the poorest people could go to be given food and shelter.  When the workhouse closed it became a hospital. When the hospital closed it became housing.
How many inmates was the workhouse originally designed to hold?
2. The Buttslands is now a carpark, but it used to be used for which sport?


4. The Town Hall was built in 1856/7. It was extended by a man called William Forster. It had a stage, a reading room and offices.
What was the town hall originally built to be?

5. The Recreation Ground is a great place to play, and lots of events have been held there too. It was given to the town by the Goulder family after the first world war as a memorial to their three sons who died in the war.
The sons were called Clare, Robert and …..

6. There were two full size railways in Aylsham – one near Millgate and one where Bure Valley railway now stands. Now there are two footpaths where the railway used to be. One is called Weavers Way and the other one is called

7. There was a cinema in Aylsham on Cawston Road. If you look at the building you can see the original “County Cinema” letters on the wall. The was opened in 1938, but who opened it?

8. Henry Page Road is named after a man who founded a large shop in the Market Place called the North Norfolk Supply Stores. Unfortunately, the front of the building collapsed.
When did the shop collapse?

9. Millgate is where there used to be Mills in Aylsham. The mills would use water from the river to power them. The river was also used by large boats called Wherries, which carried goods from Aylsham to Yarmouth. There was a big flood which washed away a lot of the riverbanks and bridges and locks which meant that boats could no longer sail.
When was the flood?
10. What was the pub on Norwich Road called?

You now have all your letters. See if you can rearrange them to find the hidden password. If you want to check you are correct, or you are stuck and need some help, you can drop an email to aylshamheritage@gmail.com